Lone Wolf: A Tale of Obi-Wan and Luke Footnotes/Endnotes—Before Baby Yoda ... There Was Baby Luke! 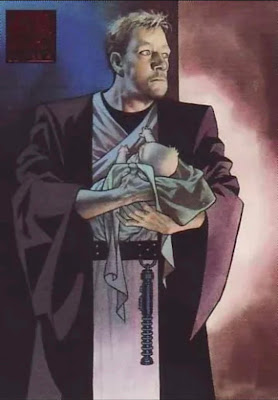 Do you even homage, bruh?

With the release of the Obi-Wan Kenobi series on Disney+, I figured there was no better time to write a little retrospective on my own Ewan McGregor-era Obi-Wan story.

Lone Wolf: A Tale of Obi-Wan and Luke takes place during the denouement of Star Wars: Episode III—Revenge of the Sith. That is, right in that space during the end of the film after Obi-Wan takes responsibility for baby Luke Skywalker and right before he delivers the boy to his aunt and uncle on Tatooine.

You can actually read all the breathtaking action beginning on page 180 of the SkyeWalkers: A Clone Wars Story ebook. Based on feedback I’ve received over the years, the casual Star Wars fan actually seems to prefer this shorter tale of the two in the book. That’s not entirely surprising, in retrospect. As opposed to the highly personal, baroque Dantesque allegorical metanarrative that is SkyeWalkers, I designed Lone Wolf as a streamlined ripping adventure in a galaxy far, far away—a “true” piece of commercial fiction, if you will. And as an homage to one of my favorite stories of all time, Kazuo Koike and Goseki Kojima’s masterpiece Lone Wolf and Cub.

I’d pedaled the adaptation of the classic manga concept of a warrior and young child into the Star Wars universe for a long time. It’s nice to see that the idea was adopted with such enthusiasm over the years. 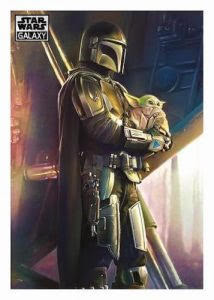 But, make no mistake: the Lone Wolf and Cub theme started in Star Wars with yours truly.

Of course, it wasn’t the first time a Star Wars creator cribbed a Japanese story and gave it a sci-fi twist. Indeed, Star Wars itself might not even exist if young Uncle George hadn’t stumbled upon Akira Kurosawa's The Hidden Fortress.

I first created daylight for an official Obi-Wan and baby Luke adventure when I wrote the following paragraph for The Story of General Grievous II: Lord of War:

After Obi-Wan defeated the Separatist general on the landing platform where his starfighter was docked, the Jedi Master used it to escape when his clone troopers turned against him. Aboard the Soulless One, Obi-Wan rendezvoused with the House of Alderaan’s consular ship Tantive IV. The ship remained in the Tantive IV’s hold until Kenobi flew the fighter to Nar Shaddaa with his newborn passenger, Luke Skywalker. Once there, Obi-Wan sold the ship in order to book himself and the infant Skywalker passage to Tatooine, and to provide credits to the child’s new caretakers. 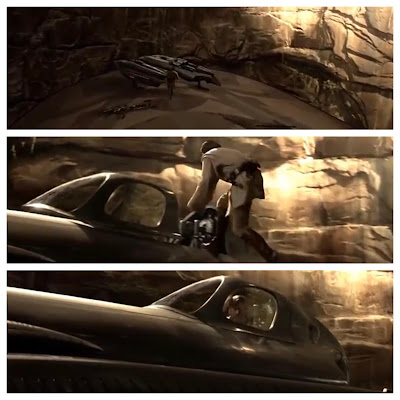 After that, I pitched the story to Star Wars Insider in 2007 for the 30th anniversary of the original Star Wars film. I thought, “This is the only other possible time that Obi-Wan and Luke could go on an adventure together other than the original movie itself!” To my elation, the story received the green light, and my old pal and collaborator, artist Joe Corroney, even delivered an incredible frontispiece for it. 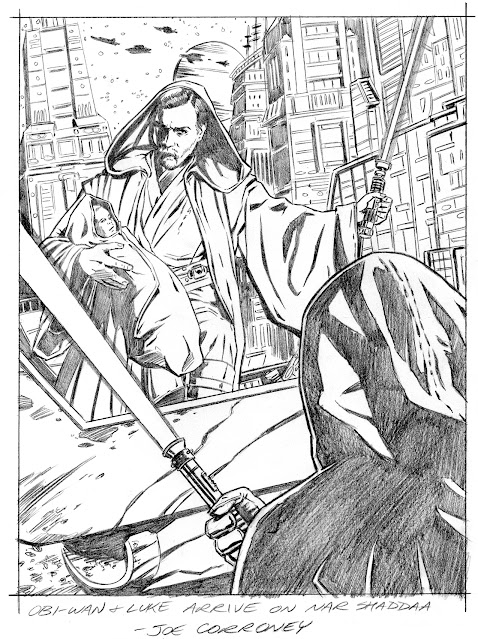 Unfortunately, dark forces intervened and there was a last-minute change of publisher, management and policy at the publication! The new folks wanted to go in a different direction. The stars had aligned, apparently—just in time to get sucked into a black hole! The short story was now without a home. What was I going to do?

Thankfully, about a year later, I received the green light to work on SkyeWalkers, and we were able to offer Lone Wolf as a bonus story at the end of the book, serendipitously bookending the Clone Wars conflict between the the yin and yang of these respectively ultra-dark and ultra-hopeful tales.

One hiccup along the way was when my friend and fellow Star Wars scribe Ryder Windham was tapped to write Life and Legend of Obi-Wan Kenobi, a kind of blow-by-blow young adult prose biography for the Jedi Knight. Thankfully, Ryder reached out while writing the book to get some facts straight and made sure to leave breathing room for Obi-Wan and Luke’s Nar Shaddaa detour to exist. 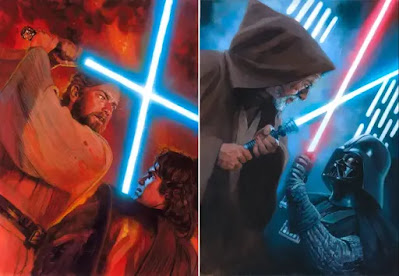 I scattered several 30th-anniversary-style Easter eggs throughout Lone Wolf. Subtle things like making reference to the Whills (a mystical species from the original movie novelization), some wheeling and dealing in the Bocce language, and having Obi-Wan at one point refer to his former pupil simply as “Darth,” as he does in their duel in A New Hope. I thought the most effective way to do the heavy lifting of invoking nostalgia was with a light touch. To this end, the setting of Nar Shaddaa itself, a.k.a. “The Smuggler’s Moon,” was intended as an echo of the first cinematic encounter we have with that “wretched hive” Mos Eisley Spaceport, while Obi-Wan’s negotiation over the sale of Soulless One was meant to “rhyme” with the bargain the old Jedi strikes with the captain of the Millennium Falcon to Alderaan. In fact, Lone Wolf even contains nods to apocryphal rumors from those early Star Wars days, such as that the Jedi Knights (or even Obi-Wan himself) originally owned the Millennium Falcon. Indeed, in an earlier outline of the story, I actually had Obi-Wan and baby Luke catching a ride to Tatooine aboard the Millennium Falcon; ultimately, I decided this was too on the nose—but for continuity hounds, the intimation that “Bammy [one of the Falcon’s previous owners] just got a hold of a stellar YT-1300,” offered in trade for Grievous’ ship, preserves the spirit of this ironic possibility in a way that I hope is worthy of Alec Guinness’ worldly-wise half-smile. 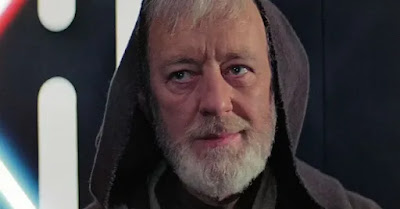 Besides the title itself, there are also nods within the story to the creators of the original manga series, and to the writer of the radio dramatization of A New Hope, Brian Daley, which I consider his best Star Wars work. And, of course, in Lone Wolf, we see Obi-Wan flipping the switch to permanently adopt his alias of “Ben” for the duration of his Tatooine exile. I tried to supply as plausible a reason for this as possible, leaning into the Lone Wolf’s theme of what it means for a Jedi, those masters of emotional detachment, to have a family.

What follows below is just a curious artifact, my original footnotes for the story, included with its submission. (If you’re interested, you can see the previous series of footnotes I wrote about for SkyeWalkers: Part 1, Part 2, Part 3 and Part 4.) Enjoy Obi-Wan and Luke's very first adventure! :)

1 (page 181) The noise frazzled the nerves of both of the stolen ship’s occupants: “Obi-Wan’s flight with Luke to Nar Shaddaa, in order to throw off pursuers and sell Grievous[’] ship, is established in ‘General Grievous: Lord of War’ on StarWars.com and the novel Life and Legend of Obi-Wan Kenobi.”

2 (page 182) [N]o way to contact Luke’s living relatives, Beru and Owen Lars…. Not without endangering their lives: “The Life and Legend of Obi-Wan Kenobi establishes that Obi-Wan obtained the coordinates for the Lars Homestead from Artoo-Detoo. This detail is reserved until the end of the story for dramatic purposes.”

3 (page 183) But Jedi had often reported such “memories” of their progenitors, somehow preserved by the Force: “For instance, Princess Leia’s recollection in Return of the Jedi. Obi-Wan’s “memories” referred to here are from Jedi Apprentice: The Hidden Past.” 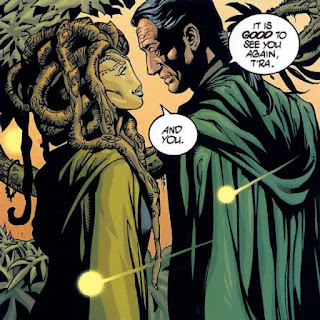 6 (page 189) A very personal patronymic namesake. “Ben,” he answered: “As seen in the Clone Wars TV episode ‘Friends and Enemies.’” [Dissatisfied with the lack of meaningful existing explanations, I tried to imply with this wording that the origin of Obi-Wan’s famous alias “Ben” might have been the name of his own, little-known father—ed.]

7 (page 193) Obi-Wan couldn’t keep his mind from summoning happier times cantina-hopping with Anakin on Naos III: “As depicted in Labyrinth of Evil.” 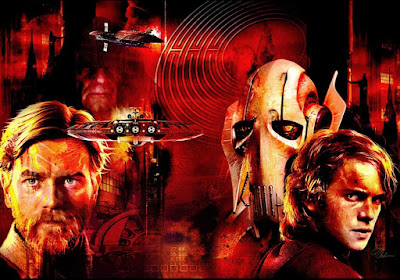 8 (page 193) It was something Obi-Wan had suspected for some time, given his phantasmal encounters on Zonama Sekot and Mortis: “These events are established in the Revenge of the Sith screenplay, the novels Rogue Planet and The Last of the Jedi: The Desperate Mission, and the Clone Wars TV episode ‘Overlords.’”

9 (page 197) Old Vima knows. Before she was crazy, Vima-Da-Boda was a Jedi: “The character Vima-Da-Boda, her residence in Nar Shaddaa and her history were introduced in the comic series Dark Empire and the Dark Empire Sourcebook.”

10 (page 202) A more … severe version of the so-called Jedi mind trick: “This power was introduced in the Jedi Academy Trilogy novel Dark Apprentice. More recently, a version of it was seen in the Clone Wars TV episode ‘Ghosts of Mortis.’”

11 (page 205) He remembered this from his time guarding Padmé’s ship on the planet and from a foray into Tusken territory … all so long ago: “During the events of The Phantom Menace, of course (and a reference to the concurrent events of the video game Star Wars: Obi-Wan).” 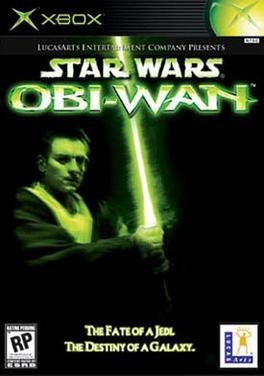 13 (page 207) Obi-Wan could feel his own features lose distinctness, his face reforming into another … someone unrecognizable: “In the novel The Crystal Star, Luke demonstrates his ability for this unique facial camouflaging.”

14 (page 207) But it was that desiccated face, the angrily angled eyebrows … and the pair of tusks jutting downward from leathery cheeks that gave Obi-Wan pause: “Unmasked Kaleesh features were depicted in The Clone Wars Campaign Guide.”

15 (page 217) Because what he didn’t see—what only Luke’s crystal-pure gaze could see—were the Chiggnash: “The scorpion-like Chiggnash were introduced in Brian Daley’s ‘Predators of the Empire,’ Star Wars Galaxy Magazine #6.” 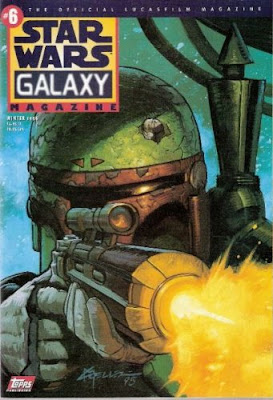 16 (page 226) The larger one, the one he’d taken for Master Tholme, was completely unfamiliar; but his dark hair, cultish facial markings and pigmentation were not: “The Bpfasshi were introduced in the novel Heir to the Empire while their depiction and backgrounds are established in Jedi Vs. Sith: The Essential Guide to the Force. The Jensaarai were introduced in the novel I, Jedi and depicted in ‘I, Jensaarai’ in Polyhedron #157. Finally, the connection between the two Force sects during the Clone Wars was established in The Official Star Wars Fact File #116.”